They say that our thoughts drive our emotions. But there are times when I think that it is very much the other way around.

For me, today was one of those days. I felt unusually powerful emotions throughout the morning; indeed, from the moment of waking from a restless sleep. Being mindful of the identity of these emotions, and, in turn, of the implications of their sudden appearance, long dormant, my mind became increasingly busy with self-examination, and conflicting analysis.

So I went for a long walk.

After about 10km, during which time I had only briefly succeeded in “finding my centre”, my downcast gaze lifted sufficiently, and at just the right moment, to notice something in a nearby field, which sight served as a metaphorical (and necessary) slap on the cheek.

Twin lambs were running eagerly across the field, to meet their approaching mother. The beauty, the majesty of this simple picture was of itself enough to liberate me from the shackles of my cogitations concerning the unimportant; that is to say, concerning myself. As my thoughts (and feelings) turned fully to this vision, leaving self-focussed thoughts and feelings far behind, the remainder of my walk was, despite physical weariness, a spiritual refreshing.

When dancing lambs and graceful ewe met in the middle, I experienced a mixed feeling of mild amusement (bringing a small smile), and empathetic affront (bringing a stab of inner pain), on seeing the forcefulness — I may even say, violence — with which the two lambs attacked their mother’s udder to suckle. It briefly occurred to me that perhaps the second of these responses arises from my upbringing, and the manner in which I was raised to view and treat the fairer sex.

Whether it is nurture, or nature that is responsible, I cannot say with any certainty. One thing of which I am certain, is that it has always felt right, and deeply natural to me, to afford the female of the species — all species, not only my own — with something that would quite appropriately be called reverence.

To treat a female — any female, of any species — with anything other than a reverential gentleness, is a concept that I find to be completely alien. Unnatural. Wrong. Not just in a moral, but in a spiritual, cosmic sense. As in, to me this is a matter of cosmic importance.

No doubt this is one among several reasons why, as mentioned in a recent post (“Before everything got amplified”), I have always felt somewhat “out of place” living in this period of human history, and more particularly, within the increasingly “loud”, aggressive, degenerative, and degrading Western culture.

It seems altogether clear to me that, for all the oft-purported glories and righteousness of the feminist revolution in the West, what has been “achieved” in actuality is almost unspeakably lamentable: a less-than-subtle, real world debauching of women.

In our grossly, crassly over-sexualised society, the marketing gurus, Hollywood celebrity machine, and avaricious bankers, have elevated onto the public pedestal the substitute image of a female “goddess” who, far from being a subject of mystery, awe, and near-divine reverence, is rather an object of thinly veiled, overtly sexual, brazen superficiality.

From every billboard, TV screen and computer monitor, we are subliminally instructed to no longer reverence woman for the uniqueness of her gender, for her femininity, her special qualities of soul, and her priceless difference, but rather, to alternately lust after, and obey her. And that’s just a male perspective; I cannot even begin to imagine the insufferable pressure — both subliminal, and overt — that our women must feel, from the age of about 7, to live up to the many conflicting, unnatural, and impossible “standards” that have been increasingly and relentlessly imposed on them from every social organ.

What for Average Man — or at least, for this average man — may once have been the Divine Feminine to be reverenced, is now portrayed instead as either mistress to be used, or master to be obeyed. For the marketers, movie creators, and money lenders, this same woman, successfully “liberated” from the drudgery of household chores and child-raising, has now been added alongside her now-emasculated male “partner”, as another “free”, “equal” wage-slave. Labouring away, every day, at a bullshit job. Another cow to be milked at the Great Western Household Debt dairy farm, borrowing electronic digits at compound interest from a bank, in order to buy more, more, and ever more “stuff” that she does not need.

You’d think Western women might have learned a thing or two from the experience of millions of women in early “revolutionary” Russia. Initially enamoured of their “liberation”, and especially of their newly-proclaimed, heretofore undreamt of sexual freedoms, only to find that their liberation from traditional home-making roles was merely in order for them to be enslaved anew; a newfound “equality” to daily labour in communist factories. And that, strangely, their menfolk no longer respected them at all, sexual “liberation” bringing only increased promiscuity, STD’s, broken hearts, and single mums. Is there really all that much qualitative difference for women in our “liberated” West? Or are our womenfolk simply too propagandised with ego-stroking “You’re worth it” cosmetics advertisements featuring air-brushed celebrity sex kittens to notice?

After watching the ewe and her lambs for some time, and walking onward a little way, not only my thoughts but my emotions uplifted and transformed, it occurred to me that it might be nice to have a photo or two. I walked back, and here they are:

I apologise for the poor image quality. Alas, all I had on me was my old, and rather basic mobile phone. I happily confess to being something of a Luddite with regards mobile phones. I have long eschewed buying a so-called “smart” phone. The internet has its place. Ever-present in my pocket it is not.

On resuming my walk, I pondered the memory of mother, and her twin offspring. They brought to mind the symbolic meanings embedded in the logos of this blog, and my recent project.

As I strode lightly onward, my earlier turmoils evaporating, I became acutely aware of my gait.

Have you ever really observed yourself as you walk? Try it sometime.

What came most immediately to my consciousness, was the opposing symmetries of movement, rotating about a centre. Arms and legs contra each other, that is to say, left contra right. And much more significantly to me, upper body contra lower body.

Now this may seem to you to be painfully simple, and unimportant. But I found it quite profound.

Try making your arm motion match your leg motion instead. I did.

In experimenting with natural versus unnatural gait, I felt deeply impressed with a sense of the mimicry, the connection that our own motion has, with the greater motions of the planet on which we live. What came to mind was an image from one of the earliest posts on this blog (“180 +/- 180”; well worth reading for its brief and valuable message, unlike this post, whose aimless rambling is rather like the walk that inspired it!). This image depicted the relative motions (notice the direction) of free air above and below the earth’s equator — 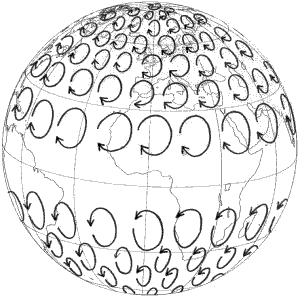 Can you see the connection?

Free relative motions. Those of the “higher” half moving opposite the “lower” half. Rotational motion, around a fixed (yet moving) centre.

As, for the first time, I fully relaxed in my walk — mind cleared, spirit unburdened — it occurred to me that the effect of walking is not unlike that which I experience when riding the Harley. Indeed, I was struck with the impression of how many similarities, how many connections, there are between these two modes of “transport”.

Walking, there is this very evident aspect of opposing symmetries of movement; rotations, about a fixed yet moving centre. My body is the motorcycle, as it were; my sense being that, not some inner part of my body (the solar plexus? Alas, I am no biomechanic!), but rather, my soul, is then the centre about which all this motion occurs.

In becoming aware of these symmetries, these connections, these similarities of motions in the natural realm, and also in man-made motion machines, my homeward journey became something quite joyous, profound, and uplifting. And this, I cannot help but observe, quite contra to my outward journey.

It seems I have a little ewe, and her twin lambs to thank for that.