The first and most profound of these occurred at my favourite place of solitude in the mountains. Borne witness here, with the title ‘Strange days indeed’.

The second occurred a couple of weeks ago. On this occasion, at my favourite lakeside haven. Shortly after my arriving and nestling down on the grass with Kindle and camera, a Butcherbird — they of the glorious mellow carrolling voice — suddenly swooped down and landed right at my still-booted feet. For a moment it looked directly at me, cocking its head quizzically. Then, even more extraordinary — and unprecedented — with a small leap and brief flit of wings, it alighted fearlessly right on top of my knee.

My left knee. The one ever prone to injury, in more youthful times.

The Butcherbird sat there happily for a few moments, looking at me. Only when I began to turn away, slowly to reach for my camera, did it swiftly fly away. I could not help but feel that this little bird had come to welcome me.

Or perhaps, to offer me a greater reason to stay. Because soon after, two vehicles rolled up the lonely dirt road, pulled over on the grass behind my motorcycle, and spilled their many occupants out. Whereupon these noisily began setting up chairs and tables for a BBQ. Such would usually signal me to politely beat a silent retreat, to some other, less trafficked locale. The hope of a return of the Butcherbird — after their departure — sufficed me to stay. And indeed, it — or rather, another of the same Family — did. Although as the photos here show, this other did not come at all so near, contenting itself to alight on my throttle hand grip instead. 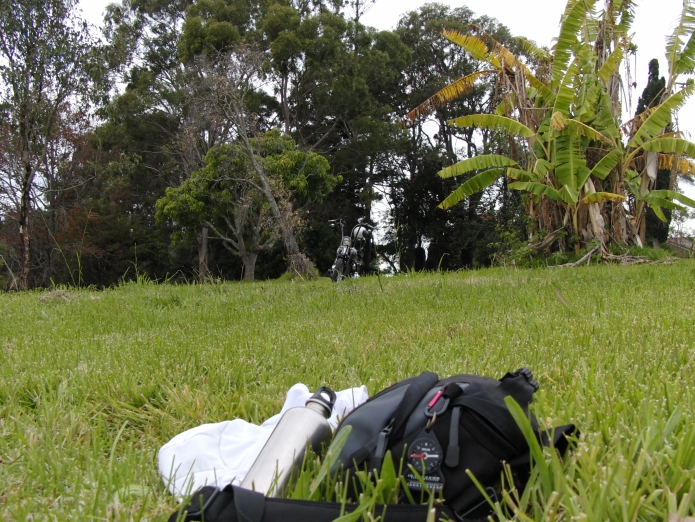 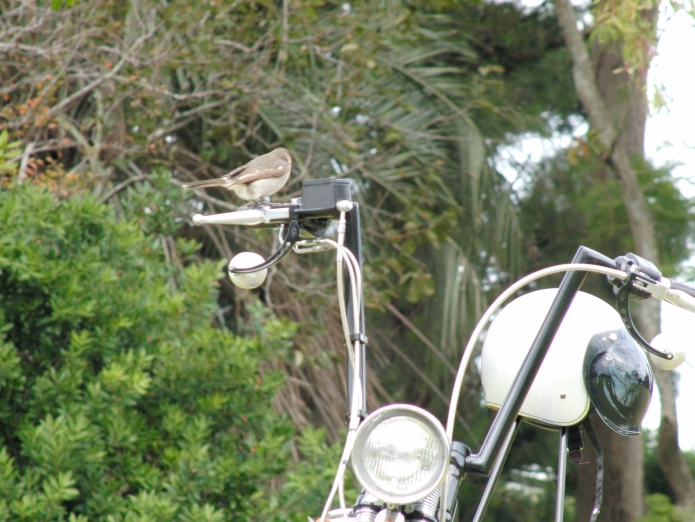 These visitations of the birds were vividly recalled to my mind two days ago, in a hospital emergency department, by my twin brother’s bedside, on reading a chapter in Symbols of Sacred Science entitled ‘The Language of the Birds’. It also recalled to mind my first poem; the subject of yesterday’s blog ‘Learning to fly’.

The following excerpt from ‘The Language of the Birds’ is worthy of deep contemplation for its own sake. However, I wish to cite it here for an additional reason. It prepares the way for another post to follow — perhaps tomorrow — on a closely related topic that is near to my heart, and to many themes in connection with the Psalmistice blog, including the symbolisms embedded in its “winged” logo, and my intuitions regarding the extraordinary, other-worldly effects induced by the spell of the silence discerned beneath the beat of a single crankpin 45° V-twin Harley-Davidson engine.

That topic, is rhythm.

But first, on the ‘Language of the Birds’ —

By those ranged in ranks,
And who drive away, repulsing,
And who recite the invocation …

There is often mention, in diverse traditions, of a mysterious language called ‘the language of the birds’ — a designation that is clearly symbolic, for the very importance that is attributed to the knowledge of this language, as the prerogative of a high initiation, does not allow us to take it literally.  We read, for example, in the Qurʾān: ‘And Solomon was David’s heir.  And he said, O mankind!  Lo!  we have been taught the language of the birds (ullimnā manṭiq aṭ-ṭayr) and have been given abundance of all things …’. (XXVII, 16).  Elsewhere we read of heroes who, having vanquished the dragon, like Siegfried in the Nordic legend, instantly understand the language of the birds; and this makes it easy to interpret the symbolism in question.  Victory over the dragon has, as its immediate consequence, the conquest of immortality, which is represented by some object the approach to which is guarded by the dragon; and this conquest essentially implies the reintegration into the centre of the human state, that is, into the point where communication is established with the higher states of being.  It is this communication which is represented by the understanding of the language of the birds; and in fact birds are frequently taken as symbols of the angels, that is, precisely, of the higher states.  We have had occasion elsewhere1 to cite the Gospel parable that refers, in this very sense, to ‘the birds of the heavens’ which come and rest in the branches of the tree, the same tree that represents the axis which passes through the centre of each state of the being, and links all the states with each other.2

In the Qurʾānic text given above, the term aṣ-ṣāffāt is taken as meaning literally the birds, but as denoting symbolically the angels (al-malā’ikah); and thus the first verse signifies the constitution of the celestial or spiritual hierarchies.3  The second verse expresses the fight of the angels against the demons, the celestial powers against the infernal powers, that is, the opposition between higher and lower states.4  In the Hindu tradition this is the struggle of the Devas against the Asuras and also, according to a symbolism which comes very close to the symbolism of our theme, the combat of Garuda against the Nāga which is, moreover, none other than the above mentioned serpent or dragon.  The Garuda is the eagle, and elsewhere it is replaced by other birds such as the ibis, the stork, the heron, all enemies and destroyers of reptiles.5

Finally, in the third verse, the angels are said to be reciting the dhikr which is generally interpreted as meaning here the Qur’ān; not the Qur’ān that is expressed in human language, needless to say, but its eternal prototype inscribed on the ‘Guarded Tablet’ (al-lawḥ al-maḥfūẓ), which like Jacob’s ladder extends from the heavens to the earth, and therefore throughout all the degrees of universal existence.

1 Man and His Becoming according to the Vedānta, ch. 3.

2 In the Medieval symbol of the Peridexion (a corruption of the word Paradision), one sees the birds on the branches of the tree and the dragon at its foot (cf., The Symbolism of the Cross, ch. 9). In a study on the symbolism of the ‘bird of Paradise’ (Le Rayonnement intellectuel, May-June 1930)  Charbonneau-Lassay has reproduced a sculpture in which this bird is represented by only a head and wings, a form frequently used to depict the angels (cf., Le Bestiaire du Christ, ch. 46, p. 425)

3 The word ṣaff or ‘rank’, is one of those many words which have been suggested as the origin of the word ṣūfī and taṣawwuf; and although this derivation does not seem acceptable from a purely linguistic point of view, it is none the less true, as with many other derivations of the same kind, that it represents one of those ideas really contained in these terms; for the ‘spiritual hierarchies’ are essentially identical with the degrees of initiation.

4 This opposition is expressed in each being by the two tendencies, ascending and descending, called respectively sattwa and tamas by the Hindu doctrine. It is also that which Mazdeism symbolises by the antagonism between light and darkness, personified respectively by Ormuzd and Ahriman.

5 See on this subject the remarkable works of Louis Charbonneau-Lassay on the animal symbols of Christ (cf., Le Bestiaire du Christ). It is important to note that the symbolic opposition of bird and serpent does not apply except when the serpent is considered under its malefic aspect; on the contrary, under its benefic aspect it sometimes is united with the bird as in the case of Quetzalcohuatl of the ancient Meso-American traditions. Moreover, one also finds in Mexico the combat of the eagle with the serpent. As regards the association of bird and serpent, we can recall the Gospel text: ‘Be ye wise as serpents and guileless as doves’ (Mt. 10:16).